RSS
← Jerusalem Surrounded by Armies
What Does the Olivet Prophecy Answer? →

Then shall be Great Tribulation 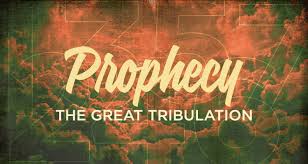 In the Olivet Prophecy Jesus pointed to a time of great trouble. Not only were God’s covenant people slain with a sword, taken captive and crucified and the remainder subject to being enslaved, but this particular time would be like no other in history either before or afterward. Why was this so? Daniel claimed it would be the time like no other in Israel’s history as a nation, and that would be when the “power of the holy people would be completely shattered (Daniel 12:7). When would Israel’s power be shattered? Notice what Jesus said in Matthew:

Matthew 24:21 KJV  For then shall be great tribulation, such as was not since the beginning of the world to this time, no, nor ever shall be.

Many folks believe that this “Great Tribulation” is an event of such great magnitude and terror that nothing would be like it, not the Inquisition, not Hitler’s Holocaust, not even anything that occurred in the Old Testament. However, is this what Jesus is saying in this prophecy? I don’t believe it is. For one thing Daniel claimed the event had to do with the time of Israel’s history as a nation, not of all time.

Let’s look at how Jesus describes this time, because it seems that he was describing only that generation that rejected and crucified their Savior. No one had the opportunity to do that prior to Jesus’ day nor afterward, so let’s be careful about what we read. Notice that the Great Tribulation concerned particularly those in Judea (Matthew 24:16).

Undoubtedly, it affected other areas as well, because the Olivet Prophecy concerned the whole civilized world as was known in the first century AD (Matthew 24:14, cf. verse-6, see also Acts 17:6-7). However, only those in Judea were told to flee! Why? Well, to where would others flee if the Great Tribulation equally affected every believer throughout the world? Apparently, then, the Great Tribulation particularly affected believers in Judea more than anyplace else.

Notice that in order to escape death those affected wouldn’t have time to pack (cf. Matthew 24:17-18). Escape would be particularly bad during winter and on the Sabbath. Why would this be so today? International travel is done on both days throughout the world, but in the first century AD, this was not so. International travel by the sea was closed down during winter. The Mediterranean Sea was simply too dangerous to risk one’s life or property from winter to spring. The Sabbath was also a time when travel was limited. A Sabbath day’s journey included one’s city and its suburbs up to about 2000 cubits or approximately 3000 feet. So, it would be particularly difficult to avoid being found and killed, if the time of one’s flight happened to occur on the Sabbath or during the winter months when travel would be so limited. Neither of these two possibilities would affect a believer today, if he or she had to flee Jerusalem.

Moreover, the time of the Great Tribulation would also be recognized with the rising up of people claiming to be the Messiah (Matthew 24:23-24). Many have come claiming to be the Messiah since the time of Jesus, so if someone would arise today and make this claim, it wouldn’t be a unique point that would imply the time of the Great Tribulation. However, up until Jesus’ day, no one had made such a claim, simply because the scriptures (particularly Daniel) pointed to the 1st century AD and no other time when the Messiah would arise. So, Jesus’ warning would be particularly important during the 1st century AD when the scriptures revealed that the Messiah would come.

So, what does Jesus mean if the language he used that concerned the Great Tribulation cannot refer to any time other than the first century AD? Jesus was referring the end of the age (Matthew 24:3), or the end of the Old Covenant. He was referring to that time when the Jews would no longer be protected by God as his covenant people. It was the time when he came to judge Jerusalem and the Temple (Matthew 26:64), during the Jew’s war with Rome (cir. 66-70 AD). It truly was a time like no other in Jewish history. It is interesting that Josephus agrees with Jesus that no other time in history prior to the Jewish War with Rome was equal to what occurred in that war.

From the beginning of the world probably no other people has endured as much as the Jews. Nor was it foreigners who were at fault, which makes it so hard to contain my grief. But if anyone censures me for this, let him assign the facts as belonging to the historical part and the laments merely to the writer himself. [JOSEPHUS: Wars 1. preface 4. (emphasis mine)]

That Josephus was referring to this particular war is seen in the fact that he blames the tyrants and zealots who conducted the war against Rome for the terrible atrocities that had no equal. Later in his histories, Josephus describes some of the atrocities that Jerusalem had to endure. Speaking of the tyrants leaving their places on the city walls he writes:

404 Then they poured through the lanes of the city with swords drawn, killing any whom they overtook outside and setting fire to the houses with all who took refuge in them. 405 As they were looting, when they came into the houses they often found in them entire families dead and the upper rooms full of those who had died of famine, and being horrified by the sight, left without touching anything. 406 But this pity for the dead did not extend to those who were still alive, for they ran through everyone they met and choked the lanes with their corpses and made the whole city run with blood, so that the fire in many of the houses was quenched with blood. [JOSEPHUS: Wars 6.8.4 (emphasis mine)]

We need to keep in mind here that these final terrible acts were committed during a siege that lasted a little less than 6 months. Jerusalem swelled with pilgrims who came to celebrate the Passover and were soon shut in by the tyrants as though the walls surrounding the city were those of a prison. No one was permitted to leave. Josephus describes the death toll in no less than 1.1 million, and those mostly men, women and children who had come to the city to worship during the Passover. Josephus defends his figures by showing how a recent census was taken by the order of Rome. The priests counted the sacrifices slain in worship at the Passover and found there were 256, 500. In such a case no fewer than 10 were permitted to partake of the lamb, but as many as 20 would have taken part. This figure doesn’t take into account that some with certain diseases would not be permitted to take part at all. So, this figure shows there were no fewer than 2, 565, 000 Jews attending the Passover when the census was taken. Therefore, Josephus’ 1.1 million casualties during the siege was quite conservative. Remember these deaths occurred in one city in less than 6 months. Was there any other time in history like this one? If allowed to continue like this, would any Jew, believer or not, have survived the war?

Comments Off on Then shall be Great Tribulation

← Jerusalem Surrounded by Armies
What Does the Olivet Prophecy Answer? →