Why would Luke highlight the meeting between Mary and pregnant Elizabeth? He could have simply stated that Mary hurriedly visited and stayed with Elizabeth for about three months. Yet, he does not. He considers their meeting important enough to use up precious space in his narrative (a scroll[1]) to record their meeting and greeting one another. What does all this mean for believers both in the first century AD and today? END_OF_DOCUMENT_TOKEN_TO_BE_REPLACED

Comments Off on When Mary Greeted Elizabeth

Mary’s Journey to the Hills of Judea

Luke tells us that Mary made haste to visit Elizabeth (Luke 1:39). Therefore, she didn’t wait around in Nazareth unnecessarily, but journeyed to Judea at the earliest opportunity. She was anxious to see Elizabeth and prove the angel’s words one way or another. The problem is that a young girl wouldn’t make such a journey alone. It would be assumed by all in first century culture that respectable women never traveled alone. Luke presents Mary’s safe visit to Elizabeth and her safe return home by assuming a Jewish context of safety. That is, he implies the use of the Jewish annual festivals and of Mary’s using pilgrimages with friends and relatives to journey to and from Judea. END_OF_DOCUMENT_TOKEN_TO_BE_REPLACED

Comments Off on Mary’s Journey to the Hills of Judea

The Lord Coming in Flesh

The first persecution of the Church that ended in death concerned how we understand God’s Presence in the world. In Acts 7 Stephen was killed by overly zealous Jews who could not tolerate the idea that God never intended us to understand his Presence locked into a fixed location – i.e. the Temple at Jerusalem. Rather he revealed himself to us as a mobile God who could be in Mesopotamia to call Abraham, in Egypt to call Moses or anywhere else in the world. Such an idea was completely foreign to rabbinical thought, but, once revealed, it couldn’t be expunged from a valid understanding. The New Testament theology of God’s Presence within man and traveling with him, wherever he goes, has its context in the Wilderness years of Israel’s history. END_OF_DOCUMENT_TOKEN_TO_BE_REPLACED

Comments Off on The Lord Coming in Flesh

Many folks will say, and I agree, that one could read a particular Scripture many times, yet, in reading it once more we would find something we never saw before. This is no less true even now, as I consider Gabriel’s greeting to a young maiden in Nazareth to announce what we call the Virgin Birth. Luke tells us that in the 6th month of Elizabeth’s pregnancy (Luke 1:24, 26, 36) the angel, Gabriel (Luke 1:26-28; cf. verses 11 & 19), came to visit a young maiden named Mary. She was engaged to a man named Joseph, who was descended from King David, and she was a virgin (Luke 1:27). END_OF_DOCUMENT_TOKEN_TO_BE_REPLACED

Comments Off on Gabriel’s Greeting to Mary

Why Did Elizabeth Hide?

The Gospel of Luke is the longest of the four Gospel narratives, but we need to remember that when it was first written it was a scroll. The information one could put on a scroll was limited. Although authors today are able to write large volumes having 600 or more pages, it wasn’t like this in the 1st century AD. By comparison the Gospel of Luke, the longest Gospel narrative, is less than 100 pages by today’s standards. Space was a premium! Luke had to limit himself to what was important to say and not be carried away in digression, concerning unnecessary events. Why, therefore, does he believe the fact that Elizabeth hid herself for five months is important? END_OF_DOCUMENT_TOKEN_TO_BE_REPLACED

Comments Off on Why Did Elizabeth Hide?

The final prophecy of the Old Testament is found in Malachi where God promised to send the prophet Elijah before the coming Day of the Lord. According to Luke, John would not only embody the prophet Elijah, but also the messenger who would be sent before the coming Messiah (Luke 1:15-17; cf. Malachi 3:1; 4:5-6). It was John’s responsibility to turn the hearts of the people back to God in repentance, thus “to make ready a people prepared for the Lord” or their Messiah (Luke 1:17; cf. Malachi 3:1). Moreover, Moses claimed he would be like him (Deuteronomy 18:15), and God would hold his people responsible for not believing the Messiah’s teaching (Deuteronomy 18:18-19). The Day of the Lord was a time of God’s judgment, and John (Elijah – Luke 1:17) was sent to turn the people’s hearts to God in repentance to save them from judgment (Malachi 4:5-6). END_OF_DOCUMENT_TOKEN_TO_BE_REPLACED

Comments Off on God, Face to Face!

Luke’s infancy narratives are peculiar to Luke’s Gospel. One would find it difficult to connect Luke to Matthew, for example, if all one had were the infancy narratives. Moreover, most of the commentary that concerns itself with the birth of John seems to center around John and his family, rather than pointing toward the coming of Jesus. This is odd, if one considers the fact that John comes to reveal or prepare the way for the coming of the Messiah. It was so in John’s ministry, and it should be no less so in his birth. John came as a witness to bear witness to the coming of the Lord. His mission was to prepare for God a people who would be ready for Jesus’ preaching. END_OF_DOCUMENT_TOKEN_TO_BE_REPLACED

Comments Off on God Remembers His Covenant

The Course of Abijah

Luke tells us in Luke 1:5 that the officiating priest, Zacharias was of the course of Abia. Once the Temple was built by Solomon, the duties of the priests and Levites would have to change, because the whole idea of building a Temple of God in a fixed location at Jerusalem meant the mobile Tabernacle, which was packed up and carried from one place to another, would be replaced. Duties concerning how one served God with respect to where his Presence dwelt would of necessity change as well. Therefore, David organized the priests (and the Levites) into 24 courses (1Chronicles 24:1-31). Notice that the course of Abijah was the eighth of the priestly divisions (1Chronicles 24:10). Abijah in 1Chronicles 24:10 is the same course as Abia of Luke 1:5. Zacharias was officiating in the Temple according to the time when the eighth division served out its responsibility. END_OF_DOCUMENT_TOKEN_TO_BE_REPLACED

There have been many presumptions made about the author of Luke’s Gospel narrative, and about how he formulated his narrative and what his purpose was with respect to his recipient, Theophilus, and by extension to us, Luke’s larger audience. It may be fun to explore these ideas further. I hope to do this not only by demanding proof of our more traditional assumptions about Luke and his labor in the Gospel, but also by presenting an alternative perspective that may fit the context of his work better. END_OF_DOCUMENT_TOKEN_TO_BE_REPLACED

Theophilus and the Infancy Narratives

One of the problems we are faced with, if we insist Luke’s mention of Theophilus in Luke 1:3 refers to a new gentile believer whose faith needs to be strengthened (Luke 1:4), is that he is very vague about the content of his infancy narratives. For example, Luke mentions the priestly course of Abajah—what does that mean to a gentile. He also mentions offering incense, which to the Jews concerned prayer but not necessarily so for the gentile. Why does Luke do this? However, if we believe Theophilus (Luke 1:3) is an unbelieving Jew who needs proof of that which he has been informed (Luke 1:4), the whole matter needs no further explanation! END_OF_DOCUMENT_TOKEN_TO_BE_REPLACED

Luke’s preface to his Gospel shows that he intended his Gospel narrative to be an apologetic (Luke 1:4) for Most Excellent Theophilus (Luke 1:3). Thus, Luke identifies him as an official of some rank, for he quotes several people addressing the Roman governors, Felix and Festus, in very same manner (see Acts 23:26; 24:3; 26:25). While most scholars conclude that Theophilus must have been an official of some kind, they conclude he was a new gentile convert to Christianity, but this doesn’t seem plausible when one considers the context of Luke’s uncluttered narrative. END_OF_DOCUMENT_TOKEN_TO_BE_REPLACED

Who is Theophilus of Luke and Acts? 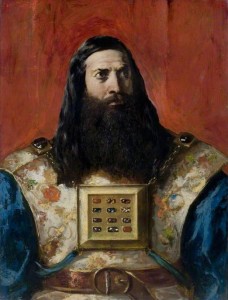 Knowing the identity of Theophilus (Luke 1:3), could be key to understanding important themes within the narrative. Is he a believer, as some suppose, who was already instructed in the truth whose faith Luke was hoping to strengthen (Luke 1:4)? Some suppose the name is simply a title for all Christians. The name, “Theophilus” means lover or friend of God. While this may be true concerning a Christian, no other New Testament book or epistle is addressed in this manner. Moreover, neither is any work or letter of the early church fathers addressed this way. Therefore, such a conclusion should be understood as based solely upon supposition, not related to anything within the text itself, or anything outside the text that could be tied to either Luke or Acts. END_OF_DOCUMENT_TOKEN_TO_BE_REPLACED

Comments Off on Who is Theophilus of Luke and Acts?