RSS
← What Is the Wrath to Come?
The Interest in John’s Baptism → 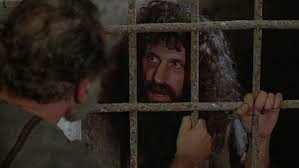 It might be significant that immediately before the Jewish authorities’ argument with John’s disciples in John 3:25 that we are told John was not yet cast into prison (John 3:24). Personally, I believe that it is very significant. In fact, I believe the Jewish authorities, in this case probably the Pharisees (John 1:24) are directly responsible for John’ imprisonment. They may have brought along the Herodians (cf. Mark 3:6; 12:16) and got John (or his disciples) to speak against the adulterous marriage of Herod Antipas and Herodias. Once John could be accused of speaking out against Herod, that he was in an adulterous affair, the Herodians could have gone to Herodias to tell her, and she would have gotten Antipas to arrest John.

I believe it is telling that Jesus was concerned about the Pharisees in John 4:1 (cf. John 3:26). Jesus had been with the disciples in Judea, and they were baptizing the people, just as John had been doing (John 3:22). He didn’t depart for Galilee, until he heard that John was cast into prison (Matthew 4:12; Mark 1:14; cf. John 4:43). Therefore, John 4:1-3 implies that the Pharisees had had something to do with John’s imprisonment, and Jesus departed immediately even without buying supplies for the journey (John 4:6, 8). The text records that it was necessary for him to go through Samaria for Galilee (John 4:4), yet there were indeed other ways to get from Judea to Galilee. However, Jesus chose that route, because the cleanliness conscious Pharisees would want to avoid going through the lands of the despised Samaritans to capture him (cf. John 4:9).

The Pharisees were a sly sect. They would either openly fight their foes or have others do it for them (cf. Mark 12:12-13).[1] The reminder that John was not yet cast into prison coming just before the quarrel between John’s disciples (John 3:24) and the Pharisaical argument concerning the traditions of the fathers (John 3:25) seems to point to clandestine events. The Gospel writer’s own veiled reference in John seems to argue for an early writing—i.e. before the Jewish war with Rome, because a more forthright comment accusing the Pharisees would have brought reprisals against the Jerusalem church. The fact that the matter is veiled argues that the Pharisees and Sadducees were still in power at Jerusalem.

At least many of the Jewish authorities of the first century AD, including rabbis and scribes, believed that Abraham’s righteousness had been passed on to his descendants in such a manner that God couldn’t judge the Jews so harshly that he would destroy them (i.e. their national identity). These were mountains, refusing to become a plane before the Lord (Luke 3:4-5; cf. Luke 3:8).

Stones or rocks are often used metaphorically for people in the Bible (Isaiah 51:1; cf. Genesis 17:15-17). The term is used of Christ (Romans 9:23), and of God (1Samuel 2:2; cf. Deuteronomy 32:4, 18, 31). John seems to use a play on words in the Aramaic that is lost in the Greek at Luke 3:8. The word for “stones” in Aramaic is abnayya, and the word for “children” is benayya. John seems to be pointing to observable stones at his location, which he implies are gentiles or folks who are not physically descended from Abraham. Later, Jesus implied that the children of Abraham would do the works of Abraham—i.e. believe God (John 8:39), implying as John does in Luke 3:8, that spiritual children, i.e. anyone who does the works of Abraham, are considered children of Abraham. In other words, John claimed God cannot be forced through a relationship in the flesh to unconditionally bless Israel (Jeremiah 18:10). When it comes to righteous judgment God is completely impartial.

[1] See Josephus, Antiquities of the Jews (17.2.4): “These are those that are called the sect of the Pharisees, who were in a capacity of greatly opposing kings. A cunning sect they were, and soon elevated to a pitch of open fighting and doing mischief.”

Comments Off on Contending with John

← What Is the Wrath to Come?
The Interest in John’s Baptism →