You Are the Children of God! 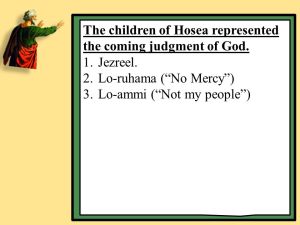 It has been claimed that Peter wasn’t writing specifically to believing Jews, because he mentions in 1Peter 2:10 that his readers were in the past “not a people (of God), but now are the people of God.” Paul even uses these words to denote gentiles who were never the people of God (cf. Romans 9:24-25). Paul claims God called the gentiles his people in order to provoke the Jews to jealousy (Romans 10:19; cf. Deuteronomy 32:21). The problem with comparing Peter with Paul and forcing Peter to say what Paul says is: that Paul was sent to the gentiles, but Peter to the Jews. There would, therefore, be obvious differences in their preaching of the Gospel.

Both Peter and Paul quote from this Scripture. The fact is that Hosea was sent to the children of Israel, concerning the nations of Judah and Israel (Hosea 1:11). Peter’s use of it is literal in an effort to reach the Jews, but Paul takes liberties with the Scripture in an effort to reach the gentiles with the Gospel. He does this by zeroing-in on the phrase you are not my people and applying it to the gentiles who were never the people of God. Yet, although the Jews were the people of God, Hosea declared they were not.

Peter’s point in using this Scripture was to show where the Jews were declared they were not the people of God, because it was from this place that it would be shown they are the children of God. It seems that this occurred in exile. The pattern is seen in Jacob who prayed to God in exile for mercy (Genesis 32:11), because he was afraid of his brother, Esau, because Jacob and his family were returning to Canaan. Therefore, Peter implies that his readers have obtained mercy while in exile among the heathen.

Peter appeals to his readers as strangers and pilgrims (1Peter 2:11), saying they should abstain from carnal desires that contend against the soul (i.e. one’s heart) and, rather, act honestly—in the manner that reflects Christ within them (cf. Colossians 1:27; 3:16), while they live among the gentiles who speak evil of them (1Peter 2:11-12). The question arises then, why would the neighbors of Peter’s readers speak evil of them? Acts 18:2 and 24:5-6 imply that disturbances throughout the Empire were instigated by someone in an effort to expunge the Jesus Movement among the Jews. If Jews, heretofore, had been dwelling peaceably among the gentiles until the Jesus Movement occurred, gentiles would be led to believe the trouble was caused by Jesus’ disciples, so they would speak evil of Messianic Jews and gentiles who believed their testimony.

It seems, therefore, that persecution had already begun against Jesus’ disciples in Asia Minor. First, in the way of unbelieving Jews initiating disturbances (cf. Acts 13:50-51; 14:2, 5, 19; 17:5-9, 13; 18:2), and, secondly, through gentiles who misinterpreted the reason for the disturbances. Nevertheless, Peter called for patient endurance of the current trials (1Peter 1:7, 13), so their good works would be noted by the unbelievers at the day of visitation, which concerned the day when Jesus would come in judgment upon Jerusalem and the Temple (Luke 19:44; cf. Matthew 26:64). The importance of being different from gentiles and Jews becomes evident when Christ passes judgment upon the source of our trouble (cf. Matthew 5:16; Titus 2:7-8).

Comments Off on You Are the Children of God!

Posted by Eddie on December 7, 2016 in Epistles of Peter

← The Context of the Centurion’s Request
The Authority of Jesus →