RSS
← Spending Time with Jesus
Sending Out the Twelve → 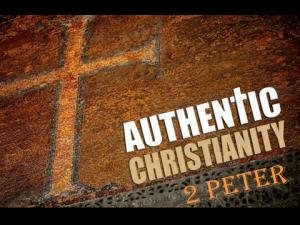 In an earlier posting, I argued for the authenticity of both epistles of Peter together.[1] Before entering into an actual study of Peter’s second epistle, I would like to look again at its authorship in an effort to further confirm its legitimacy in the canon of Scripture. While some folks may consider this a biased approach to knowing its author, I have to wonder who is ever unbiased in anything he says or does in the search for truth. Does an atheists honestly consider the evidence before him, or does he study the evidence with a view of knowing how he might support his worldview? Similarly, does the Biblical critic really approach the study of the New Testament with a view of proving an unbiased truth about it, or does he approach his study with the purpose of further substantiating his personal convictions about the matter? If there is truly an unbiased person in this world. I would like to meet him.

I don’t mean to say that no one can change his point of view, because people have changed their attitude toward God and his word, but, as much as I can tell, these people are ‘surprised’ in some way by what they find. That is, their study was biased to begin with, but their bias had been overcome by something that surprised them that they simply could not honestly explain it away.

One of the arguments against accepting Peter’s second epistle as authentic is its late admittance into the Canon of Scripture. However, this argument seems to be aimed at a technicality rather than showing evidence for its dismissal. For example, Eusebius claims that Second Peter was among the disputed works of the New Testament.[2] What does that mean? Well, it means it was then as it is today; namely, that many approved its authenticity, but some doubted it. Since most authorities at that time considered it Scripture, it was placed in the New Testament. However, this doesn’t mean it was simply ‘voted’ into Scripture. Other things were brought to bear upon its inclusion, including how many churches had copies of it, which, if the majority had copies, was evidence of its longevity. In other words, it couldn’t have been recently written, if the vast majority of churches in the world had copies of the letter.

There is a vast difference between a ‘disputed’ work and pseudepigrapha, which was rejected outright. If a work is disputed, this implies evidence of authenticity. It says nothing of ‘overwhelming’ evidence, but evidence nonetheless. On the other hand, if something is considered pseudepigrapha, it contains evidence of it not being authentic. It is not simply disputed; it is considered apostasy—rejecting the foundational teaching of one’s faith.

Much has been said about the difference in literary style between First and Second Peter, but much of this can be accounted for, if Peter wrote his epistles through two different men. Silvanus seems to be the scribe Peter used to write his first epistle, but he names no one in his second epistle, which perhaps points to a different scribe. Moreover, even allowing for the differences in style, no other book in the New Testament is more like First Peter than Second Peter.[3] At the end of the day one must admit, no matter which side of the fence one takes with 2Peter, that there was considerably more evidence to consider in the 4th century AD, which led to 2Peter’s inclusion into the Canon, than we have available to us today. One must ask, at what point would the Biblical critic consider it legitimate for us to agree with the decision made by our brethren cir. 1600 years ago—i.e. what “evidence” would satisfy him? While I must admit that disagreement over these things has led me to a place of greater respect for the decisions made by our ancient brethren, I have to wonder what would lead the Biblical critic to do the same?

[1] See my study: “Authorship of the Epistles of Peter.”

Comments Off on Authorship of Second Peter Revisited

Posted by Eddie on February 15, 2017 in Epistles of Peter

← Spending Time with Jesus
Sending Out the Twelve →