RSS
← Remembering
The Gospel and Myths →

Did Jesus Already Come in Power? 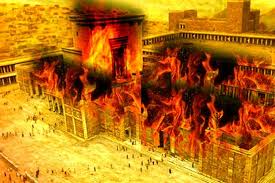 According to Acts 14:22 the Kingdom of God is entered sometime **after** one becomes a believer. In other words, the people Paul spoke with were believers, having the Holy Spirit, yet they were not, as yet, in the Kingdom of God, because it is entered only through much tribulation. Therefore, observing the rapid spread of Christianity cannot be viewed as discerning (G1492) the Kingdom of God, nor can any of the other theories (see HERE) with the exception of #4, the destruction of Jerusalem and the Temple.

“…those who were witnesses of the great catastrophe which resulted in the sack of Jerusalem and the ruin of the Jewish polity, can scarcely be said to have looked on the kingdom of God. It was rather a great and terrible judgment; in no way can it fairly be termed the kingdom, or even its herald; it was simply an awful event in the world’s story.” [Pulpit Commentary at Luke 9:27]

Yet, Jesus told the high priest that he would see Jesus come in power and judgment against Jerusalem (Matthew 26:64), and he told his disciples that his coming (Luke 21:27) would follow many signs that show its approach (Luke 21:28, 31), and this event would occur in the Apostles’ expected lifetimes (Luke 21:32), although only some would survive until that time (Luke 9:27; cf. Matthew 23:34-36).

What has been misunderstood by the commentary mentioned above and others is that Jesus’ coming in 70 AD was both for judgment and for blessing. He told the Jewish authorities that the Kingdom would be taken from them (cf. Matthew 21:43), which occurred in 70 AD, and be given to a nation showing the fruits thereof, which fruits Jesus’ disciples yielded for the previous cir. 40 years. Paul had promised believers, if they endured to the end, they would reap a place in the Kingdom of God (2Thessalonans 1:5). Peter also told his readers that the reward of their trial of faith was to be received at the apokalupsis (G602–revelation—same word as in Revelation 1:1) or the appearing of Jesus Christ (1Peter 1:7).

Apokalupsis (G602) does not mean that Jesus would actually be seen with the naked eye, just as the high priest didn’t actually see Jesus coming in the clouds (Matthew 26:64-65). However, the high priest knew what Jesus meant and lived to see him come to judge Jerusalem in 66 AD, marking the beginning of the Jewish war with Rome. The term apokalupsis (G602), which means revealing, is used to express God’s coming to judge or reward men according to their works (Jeremiah 4:14; Isaiah 19:1; Psalm 18:10-12). This was so, as it concerned Jerusalem and the Temple (Joel 2:1-2; cf. Mark 13:26; 14:62; Isaiah 64:1-12), but it was especially true for the disciples of Jesus.

Comments Off on Did Jesus Already Come in Power?

← Remembering
The Gospel and Myths →