RSS
← A Thousand Years, a Watch in the Night
The Lord Does Not Delay his Promises →

Where is the Kingdom of God? 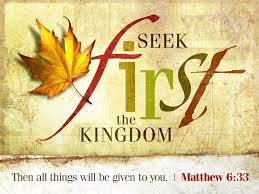 The Pharisees asked Jesus when the Kingdom of God would come (G2034), which, according to Thayer’s Greek Lexicon, means: “to come into being, arise, come forth, show itself, find place or influence” (Luke 17:20). It makes no difference whether or not the Pharisee’s question was sincere. Whether they sought to lay a trap for Jesus or sincerely wanted to know when the Kingdom of God would come, the point is their question cannot be answered according to its intent. It would be similar to asking a conservative politician if he is still a flaming liberal. How could he reply to the question’s intent? In order to reply at all, the main term must be redefined, so the question appears is illogical.

Jesus had been teaching his disciples to obey his command to forgive those who had wronged them, even when such a one’s apology seemed insincere (Luke 17:3-4). However, no matter what prompted the Pharisees’ question, the fact remains that they refused to put their trust in Jesus (Luke 16:14). They didn’t obey his commands, and they wouldn’t forgive anyone who offended them, especially those who seemed (to them) to be insincere (cf. Luke 15:1-2).

Jesus explained that the Kingdom of God is quite unlike the kingdoms of this world. One could point to the Empire of Rome and say, “There it is!” but one couldn’t do the same with the Kingdom of God (Luke 17:21). Moreover, neither would one find it through close observation (G3907). That is, one cannot observe “signs” that would accompany its appearing. The Greek word for observation (G3907) is the noun form. Its verb form (G3906) is used in the New Testament for Jesus’ enemies closely watching him, hoping for something to occur that would enable them to find fault with him. Just as Jesus’ enemies closely watched him for evidence of a fault, so Jesus claimed the Kingdom of God could not be observed coming into existence by noting expected signs or evidence.

In other words, the Kingdom of God could no more be observed coming into existence than the lepers were able to observe their actual healing take place. They didn’t know they were healed until it was done (Luke 17:14). Neither could the apostles forgive until they extended the effort (Luke 17:3-4). God supplied the power of healing of the lepers and the enablement to forgive trespasses. All man is required to do is obey, something which the Pharisees refused to do, and because they refused to obey God, they couldn’t understand or embrace the coming of the Kingdom of God, a Kingdom in which men obeyed God.

Jesus’ claim is the Kingdom of God is within man (Luke 17:21). That is, God rules our hearts. If God doesn’t rule our hearts, how would he be able to rule us at all and still allow us the gift of freewill? Therefore, God’s throne is the heart of man. His Kingdom is within us (Luke 17:21; cf. 8:5-8). God made man ruler over all he had created (Genesis 1:26; Psalm 8:4-8), and God will not change his original plan, which was set in place from the beginning (cf. Romans 11:29). If, therefore, mankind rules what is outside of man, God cannot rule that and still permit man to rule. Rather, God’s throne is within man, himself, molding man into an image of God, so that man will rule what God has created in a responsible and respectful manner.

So, is the Kingdom of God within unbelievers? Yes, it is. However, the unbeliever is still in rebellion. He couldn’t be in rebellion, if he were doing what God gave him to do. Even if man used the gift of God irresponsibly, he couldn’t be in rebellion, if God gave him governorship over creation. Therefore, if God is to participate in what he brought into existence, it must occur through mankind, whom he created in his own image (i.e. the image of God). God’s only place in his creation is within man.

From within us, God is able to enjoy the work of his hands. God’s proper place (as he defined that place) is within man’s heart (Luke 8:5-8). If man offers God no place in his own creation, man is in rebellion. Man’s proper place in God’s creation is governing the whole work of God’s hands, but since man has been created in order to image God, God must rule man from man’s heart. In order for man to properly image God (the very reason for his existence) he must have a proper relationship with God, something Adam refused to maintain (cf. Genesis 2:16-17; 3:1-6), and something into which the Pharisees refused to enter (cf. Matthew 23:13; Luke .11:52; 13:24).

Comments Off on Where is the Kingdom of God?

Tags: God's place, heart of man, Jesus, Kingdom of God, observation, the kingdom is within you, Throne of God, unbelievers, watching

← A Thousand Years, a Watch in the Night
The Lord Does Not Delay his Promises →