RSS
← Who Is the Final Authority?
Heavenly Zion → 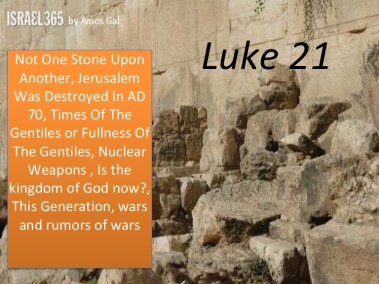 Much has been said about the Olivet Discourse being a prophecy for our day. Claimants try to show by using this prophecy that Jesus foretold his Second Coming to the earth in our own modern age. Is this true? To be perfectly honest there are many reasons why such a perspective  is false. This prophecy was for the first century AD, and this point of view is supported by simply reading the prophecy in context. Nevertheless, there are many who refuse to believe such a thing is so, and would rather see it as a prophecy for our day, because great worldly wealth can be gained by adhering to such a doctrine. Certainly, many have embarrassed the Church, through their false prophecies, and many people who believed the false prophets have been abused. So, it can be said that great injury has been brought to bear upon the name of Christ through their profiteering. Such is the fruit of twisting this scripture into a doctrine of men.[1]

Luke opens up the prophecy by telling us the disciples pointed out how beautiful the Temple was, how it was adorned with so wonderful and precious gifts and how great the stones were that that composed its foundation and its buildings and walls (Luke 21:5).[2] He doesn’t say what precipitated their pointing out these things, but Matthew does. As Jesus was leaving the Temple compound, he paused to lament over Jerusalem, saying this city was responsible for killing the prophets, yet he longed to protect her as a hen does her chicks. Nevertheless, they constantly refused him (Matthew 23:37-39). Therefore, as a priest condemns a house of leprosy (Leviticus 14:33-45), Jesus said the House—the House of Jerusalem, its Temple—is left desolate, i.e. a wilderness, a desert. Thayer defines the Greek word (eremos – G2048) as: uninhabited; deprived of aid and protection; the word points to a flock deserted by its shepherd; or to a woman neglected by her husband, from whom the husband withholds himself.

Jesus told his disciples that, as for these magnificent stones, which they pointed out, the day was coming when there wouldn’t be left one stone upon another that wouldn’t have been thrown down (Luke 21:6) According to Luke, the disciples afterward asked first, when these things would occur, and secondly, what sign would forecast their coming (Luke 21:7), i.e. what event or events would warn the disciples of the nearness of this calamity?

Some readers are troubled over how Luke’s account is different from Matthew’s. Both Matthew and Luke record the disciples question: when shall these things be? However, while Luke asks for a sign when these things (i.e. the destruction of the Temple) will occur, Matthew records them asking what would be the sign of Jesus’ coming, and of the end of the age? What do the differences mean?

Unless one brings his own information or his own perceived truth with him, as he reads Matthew 24:3 and Luke 21:7, he must conclude that the signs point to the same thing. Matthew simply expresses the questions one way and Luke another, but they mean the same thing. In his first epistle Peter told his readers that the reward for their trial of faith was to be received at the apokalupsis (G602–revelation—same word as in Revelation 1:1 ) or the appearing of Jesus Christ (1Peter 1:7). The term apokalupsis (G602), meaning revealing, is used to express God’s coming to judge or reward mankind according to their works. When the scriptures record God coming to judge mankind, they often show him coming in the clouds of heaven (cf. Jeremiah 4:13; Isaiah 19:1; Nahum 1:3; Psalm 18:10-12). However, this doesn’t mean that Babylon or any of the other nations actually saw God coming, but they did see their impending destruction (God’s judgment upon them) coming!

Peter tells us the prophets of the Old Testament wanted to understand how a suffering Messiah could bring salvation, so they asked the heavenly beings with them and diligently searched the scriptures for understanding about what was told them (1Peter 1:10-11). Nevertheless, they were told that their words were meant for another generation, not their own (1Peter 1:12; cf. Daniel 12:8-13; Habakkuk 2:1-4). According to Peter, the prophets of old sought to understand the time in which Christ personally ministered, i.e. “the last (G2078) time (G2540)” or perhaps more appropriately, the end of the appointed time (1Peter 1:4-5). Therefore, this is how the Apostles, who asked the questions in Matthew 24:3 and Luke 21:7, perceived the answer Jesus gave them, and Jesus’ reply is known as the Olivet Prophecy.

[2] See Tacitus: Histories 5.8. “A great part of Judaea consists of scattered villages. They have also towns. Jerusalem is the capital. There stood a temple of immense wealth.”

Comments Off on The Olivet Prophecy

← Who Is the Final Authority?
Heavenly Zion →