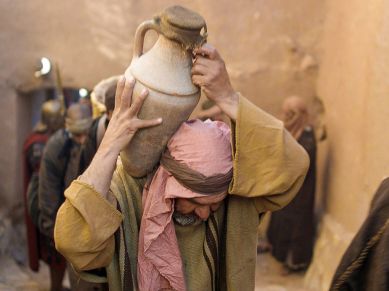 In the course of planning events, at times it is necessary to at least arrange some things secretly. For example, if the President of the United States were to make an appearance in a certain city, his route and destination may be known, but where his protectors (Secret Service Agents) were located would be unknown. Likewise, when Jesus’ life was in danger, he did certain things secretly. For example, when intended to celebrate the Feast of Tabernacles at Jerusalem during the second year of his public ministry, he went there secretly (John 7:10). Moreover, when the Jewish authorities sought to kill Jesus immediately following his raising Lazarus from the dead (John 11:53), he left the vicinity of Jerusalem, and no one knew where he was (John 11:54-57).

At the beginning of Passover day, Nisan 14, Jesus sent Peter and John to prepare the meal for that Passover evening (Luke 22:8). The sense is that they would arrange what was needed, because the meal itself was prepared by others who awaited Peter’s and John’s arrival. Apparently, none of the Apostles knew where Jesus would sit down and eat this meal with them (Luke 22:9). So, Peter and John were told to go into the city and look for a man carrying a jar of water (Luke 22:10). The city, into which the two were sent, was none other than Jerusalem (Luke 22:10, 39; cf. John 18:1).

In a city with so many people during the Passover season, at first such a detail as “a man carrying a jar of water” seems inconclusive. Wouldn’t there be many carrying jars of water at that time for the various meals being prepared? Yes, there would, but, since carrying jars of water was a woman’s responsibility, a man carrying one would be an oddity. So, the instruction to follow him to a particular house would be a good enough instruction.

It is interesting that none of the disciples knew where they would eat that evening. Usually, one knows where he will eat his main meal of the day, but the Synoptics tell us that Jesus had to instruct the disciples were to prepare for the meal. The fact that Jesus could tell them about a man carrying a jar of water to a home where a meal was already being prepared for them, seems to indicate that these arrangements were made in advance. One might ask: what was the purpose of all this ambiguity and seemingly clandestine affairs? Such things seem to show that Jesus was aware of both the Jewish authorities’ desire to arrest him and Judas’ plot to betray him (cf. Luke 22:1-6). Therefore, secret arrangements were made earlier by Jesus with his host for the Passover evening.

Jesus told his two disciples to follow the man with the jar of water to a particular home, and there ask the man in charge of the home where the guestroom was. There they were to make the necessary preparations (Luke 22:11-13), which may have included how many tables to prepare and the seating arrangements, because that evening would be spent with more than the Twelve. Many of Jesus’ other disciples would also be there.

Comments Off on Secret Plans for Jesus’ Last Meal

← The New Creation
The New Kingdom →