RSS
← Leaving Their First Love
The Nicolaitans at Ephesus →

The Persecution at Ephesus 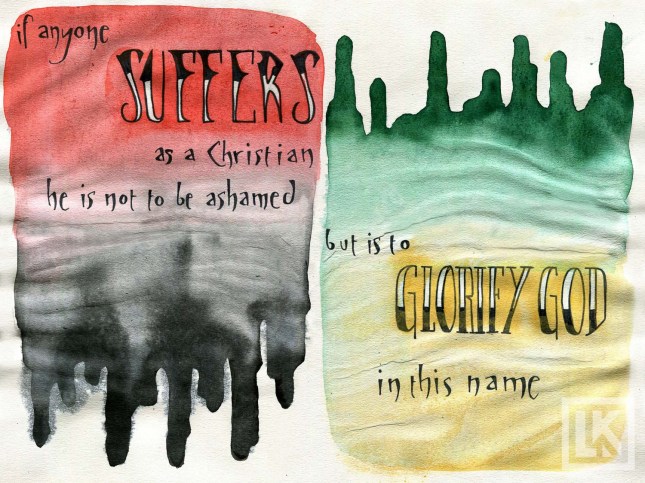 According to Peter’s epistles, believers in the Roman provinces of Asia Minor—that is, the provinces of Asia (of which Ephesus was a major city) Pontus, Galatia, Cappadocia, and Bithynta—were undergoing a season of persecution (1Peter 1:1, 6-7; cf. 5:10). Peter called upon believers to suffer the wrongdoing patiently (1Peter 2:20), which implies working against the natural tendency to retaliate in some manner. Bullying and violence promote a like response. To be reproached for the name of Christ is an honor, not something to be ashamed of (1Peter 4:14, 16), because the Spirit of God rests upon such a one who suffers for the sake of Christ’s name.

According to Paul, some believers had begun to preach or teach against bad behavior, using the law to rebuke those who had slandered or done violence to them (1Timothy 1:7-10). Such a thing is not commensurate with the Gospel, because the law seeks to punish, even to kill in the name of justice. However, the Gospel seeks to save others, which means to bring the ungodly and obstinate sinner to repentance. The Gospel calls out for patience and grace, while the law calls out for swift justice. The two are opposed to each other, as far as their modus operandi is concerned. Therefore, to preach out of the law, in order to expose sin and defame those who practice it, is to leave one’s first love, which is to reach out in love in order to save the sinner, and cover his sin (1Peter 4:8).

It seems that enduring the suffering of persecution was wearing a bit thin in the minds and hearts of some at Ephesus, and the people who were so affected were men (and women?) of some influence. They began preaching against sin rather than preaching the Gospel. I’ve heard some modern preachers say that, if God doesn’t judge America for its sins, he will have to apologize to Sodom and Gomorrah! Do such men even know what the Gospel is about? I understand their outrage for sin and depravity, but according to Paul, such were we before we came under the blood of Christ (Ephesians 2:2-3). One cannot change the world for good by bringing the sinner to justice. One changes the world by bringing the sinner under the blood of Jesus. The Law changes nothing. Jesus changes everything. The folks in Ephesus, no doubt, behaved similarly to how we have reacted to the decline in the world’s response to the Gospel in our time. People began to speculate how God would judge them. In what manner would God judge their persecutors? What might the world look like when Jesus finally came (cf. 1Peter 4:18)? Instead of enduring patiently for the fruit of the Gospel, men began to speculate about the fruits of justice. When will God judge this unrighteous world?

Jesus told his people to consider from where they had fallen, repent of the things that now occupied their labors, and begin again to do their first works (Revelation 2:5). Jesus equated one’s first love with his first works when he had first come to believe (Revelation 2:4-5). When we first come to Christ, we want to tell others what Jesus has done for us. Everything we say about Jesus drips with love, not condemnation, which seems to be a later response to sin.

Some of the ideas that may have moved folks to receive Jesus as their Savior in the beginning may have been the resurrection (Ephesians 1:20; 2:1, 5; 5:14), and the fact that Christ, not Law or a man, is Head of the church (Ephesians 1:22; 4:15; 5:23). The persecutors of first century AD believers were men, i.e. flesh and blood, but attacks against the Gospel are spiritual in nature. Therefore, our fight is not with those who slander, betray or abuse believers. Rather, it is with spiritual wickedness in high places (cf. Ephesians 6:12) i.e. with the “power” commanding the persecution. I agree with the proverb that power corrupts and absolute power corrupts absolutely. That is what occurred during the 1st century AD. Mystery Babylon the Great, who was the mother of the abominations committed on the earth, was not only drunk with the blood of the saints, but with the power she possessed and used to kill the saints (Revelation 17:5-6). Our fight is not with flesh and blood but with spiritual wickedness, which can only be overcome with the spiritual Gospel – the blood of Christ. If we are the Body of Christ (1Corinthians 12:27; Ephesians 4:12), then our shed blood is the blood of Christ on this earth. Mystery Babylon the Great is judged and the world is changed through the shed blood of Christ, and in the context of persecution it is the blood of the Body of Christ (cp. 1Corinthians 12:27; Ephesians 4:12).

Comments Off on The Persecution at Ephesus

Posted by Eddie on March 5, 2019 in Apocalypse, Book of Revelation

← Leaving Their First Love
The Nicolaitans at Ephesus →