RSS
← The Beast that Was and Is Not and Yet Is!
The Ten Horns Have No Kingdom as Yet! →

The Seven Heads Are Seven Kings 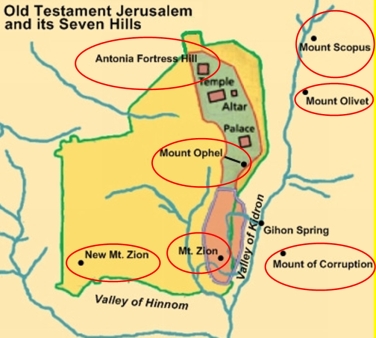 In the seventeenth chapter of the Apocalypse, the angel began to unveil the identity of the beast by saying: “The seven heads are seven mountains,[1] on which the woman sits” (Revelation 17:9). That is, she rests or finds her life in these seven heads. Much has been said by Biblical scholars to show that Rome was built upon seven hills (or mountains), thereby seeking to substantiate their futuristic conclusions about the Apocalypse. After all, Rome wasn’t destroyed in the first century AD, so the Apocalypse must have been written with a view toward some point in time far into the future. Nevertheless, there were other cities in the ancient world that were built upon seven mountains or hills. Jerusalem was one of those cities.[2]

As interesting as this is, a mountain in Scripture often refers to a kingdom (Isaiah 2:2; Daniel 2:35, 44-45), and, therefore, a king. Revelation 17:10 seems to say the seven mountains are seven kings or governors, five of which have already reigned or governed, and their government had come to an end. Either they died or were replaced. The sixth king or ruler was already reigning at the time angel spoke with John. Thus, showing that the heads of the beast do not necessarily identify the beast. According to Revelation 17:8, the beast is not in existence at the time the angel spoke with John, at least not in the context of chapter 17, but, according to Revelation 17:10, not only is the sixth ruler or head of the beast in existence, he is also reigning. But, what does all this mean? How does it fit into the context of the first century AD?

The seventh head, or ruler was yet to arise to power at the time that the angel spoke with John in the seventeenth chapter of the Apocalypse. However, when he would arise, he would rule for only a short time before he would die or be removed from office. The beast, itself, is described in the next verse as a head, an eighth head! “And the beast that was, and is not, even he is the eighth, and is of the seven, and goes into perdition” (Revelation 17:11). What could this possibly mean? In the words of Sir Author Conan Doyle: “When you have eliminated the impossible, whatever remains, no matter how improbable, must be the truth.”[3]

It is impossible for the beast to be the Roman Empire, because it didn’t cease to exist in the first century AD. It is impossible for it to be the Vatican (as many Protestant interpreters believe), because it didn’t exist at all during the first century AD, when Daniel’s “stone” struck the image at its feet (Daniel 2:44-45). What is left, in the context of the Scriptures is the Jewish state, itself. It did end in the first century AD. Therefore, no matter how improbable this may seem, the rebellious Jewish state must be the beast of Revelation 17. Its heads were the high priests, but in the context of rejecting Christ and persecuting his followers, the high priestly line must be that of Annas, the high priest, who was so instrumental in the crucifixion of Christ. After all, all three of the first major persecutions of Jesus’ disciples began when one of his sons (or son-in-law) was officiating that high office.[4]

Moreover, the text concludes that “the beast that was, and is not, even he is the eighth, and is of the seven, and goes into perdition” (Revelation 17:11). If the beast is “of the seven” and an eighth head, then…

The graph shown above lists Rome’s first choice of a high priest, Annas, followed by the rest of the males of his family. They were local rulers of the Jews, beginning in 6 AD. Annas had five sons who also held the office: Eleazar, Jonathan, Theophilus, Matthias and Ananias. Caiaphas (of the Gospels) was Annas’ son-in-law, and he had the longest reign of the seven. Jonathan, Annas’ second son (#4 in the list above) reigned twice, according to Josephus.[5] Felix, the Roman procurator had Jonathan killed, while he officiated within the Temple compound. Jonathan was killed for meddling in Felix’s affairs. The timing of this event coincides with Jerusalem’s efforts to have Paul killed, while Felix had no desire to hand over a Roman citizen to be slain by the Jews.

Notice, as well, that there is an eighth head, Matthias, the son of Theophilus. He reigned as high priest from about a year before the war to about a year after the war had begun, at which time he was removed by the rebels. He was the grandson of Annas, so the beast, in the context of its heads being high priests, began with the appointment of Annas, and it went into perdition through war with Rome with Matthias, Annas’ grandson, officiating.

[1] Or hills, depending upon the translation.

[4] The persecution that began with the murder of Stephen (Acts 7:59; 11:19) began under Caiaphas (cir. 34-40 AD); the persecution of the Apostles that began with the death of James, the son of Zebedee (Acts 12:1-3), began while Matthias was high priest (cir. 42-44 AD). The final bloody persecution of the church began with the stoning of James, the Lord’s brother, and that was done by the authority of Ananias, the fifth son of Annas (cir. 62-66 or 67), and that is recorded in Josephus: Antiquities of the Jews 20.9.1, occurring just after Paul was sent to Rome.

Posted by Eddie on February 23, 2020 in Apocalypse, Book of Revelation

← The Beast that Was and Is Not and Yet Is!
The Ten Horns Have No Kingdom as Yet! →

2 responses to “The Seven Heads Are Seven Kings”