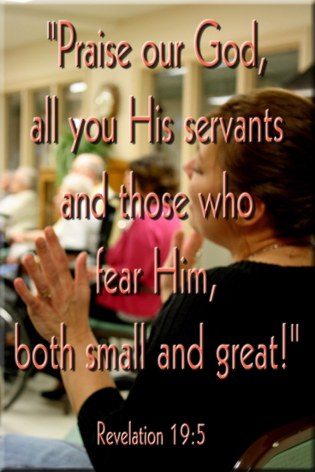 The third Alleluia of the New Covenant Scriptures was expressed through the twenty-four elders and the four living creatures (Revelation 19:4). We need to keep in mind that the Seventh Vial judgment of Revelation 16:17-21 is concurrent with the blowing of the Seventh Trumpet (Revelation 11:15-19), and both of these occur simultaneously with the opening of the Seventh Seal (Revelation 8:1-5). Each are the work of Christ expressed as High Priest (the seals), as the Prophet (the trumpets) and as the King of kings (the vials). The Lord holds all three offices and operates out of them in all of his labors. So when he operates as High Priest, he is acting as The Prophet and The King of kings, all at the same time. The Apocalypse expresses his labors in these offices separately, but the Lord is High Priest, Prophet and King of kings all at the same moment.

Suddenly, out of heaven came the call to “Praise our God!” This isn’t an alleluia, itself, but is a call to sing out Alleluia! to the Lord. While the world mourns over the great harlot, who was judged by Christ, the King (Revelation 18), the saints are called to rejoice and praise him (Revelation 19:5). All his judgments are righteous (Psalm 19:9; Revelation 16:7; 19:2), and not only so, but the great harlot was judged on their behalf (Revelation 18:20). Moreover, Revelation 18:20 is the call for the righteous to praise God, which they do in Revelation 19. So, both chapters describe the same event from two different perspectives—one from a worldly perspective, while the other is from a heavenly worldview.

The call for praise from the Lord’s “servants” whether “small or great” is taken from Psalm 115:13 and 134:1. While the text does say the call came from the throne (Revelation 19:5), this is probably an error that crept into the text. One ancient manuscript has heaven for throne, and this would fit well. Otherwise, one might say the call came from the “Throne (Room)”, which is the Most Holy Place or heaven. If we take the text as is found in the KJV and other translations we are left with the question: why would God (Jesus), who is sitting on the Throne, call for everyone to Praise **our** (which would also mean **his**) God? Does God have a God? Of course, one could use this in a technical sense, saying Jesus, as the Messiah, is under the Father in authority, and therefore the Father is Jesus’ God or Jesus’ Authority, i.e. in the context of Psalm 82; cp. John 20:17), but it is easier to explain the text to mean the voice came from the Throne (Room) – i.e. the Most Holy Place or heaven. Moreover, a similar phrase is expressed by the twenty-four elders in Revelation 11:15-18, and, since they are also mentioned in the verse immediately preceding this one (Revelation 19:4), and, the sphere of the twenty-four elders’ service is the Throne Room (i.e. heaven or the Most Holy Place), the voice most probably would have been theirs! In other words, they praised the Lord with their Alleluia in Revelation 19:4, and then call for others to praise the Lord, as well (verse-5).

Comments Off on Alleluia! The Lord God Almighty Reigns

Posted by Eddie on March 29, 2020 in Apocalypse, Book of Revelation