Since Luke tells us that Jews from Pisidian Antioch were among those in Lystra who embittered the minds of the gentiles at Lystra, perhaps it was these same Jews from Antioch who did the same at Iconium, convincing the gentile God-fearers in that city to rise up against Barnabas and Paul. Once they believed Paul was dead after the stoning incident, they may have ceased following the team. In any case, the believers at Lystra witnessed a miracle in seeing Paul arise after he was drug out of the city and supposed dead (Acts 14:19-20), because whether or not he had been dead, after Paul was stoned, he should not have been able to leave Lystra for Derbe on the following day. END_OF_DOCUMENT_TOKEN_TO_BE_REPLACED

Barnabas and Paul in Lystra

After fleeing Iconium, Barnabas and Paul came to Lystra, one of the major cities of Lycaonia. Since Luke never mentions that the apostles enter a synagogue in Lystra, there probably aren’t enough Jews there to warrant one. Therefore, they began preaching to or perhaps conversing with the locals about God. Exactly where they were in the city is not clear, but it was near the city gates (cp. Acts 14:13), where a beggar was probably placed hoping for alms (Acts 14:8), and he listened attentively. Actually, though, Luke never says the man hoped for alms; I suppose it is possible the man knew a trade in which he could labor with his hands, but if this is true, it would be surprising that Luke doesn’t mention the oddity, for back then most people who had a serious impairment weren’t trained to become financially independent. On the other hand, it wouldn’t surprise the reader to discover a man who was never able to walk was a beggar in the first century CE. END_OF_DOCUMENT_TOKEN_TO_BE_REPLACED

Barnabas and Paul in Iconium

When the missionary team was expelled from Pisidian Antioch by the civil rulers there, they traveled to Iconium and entered the local synagogue. An interesting point, at least to me, is that Luke doesn’t mention either Barnabas or Paul by name while they preached in Iconium. Luke refers to them always in the plural using the pronouns they or them, and once calls them apostles. In fact, if one reads only Luke’s record of the Iconium evangelistic effort without knowing what occurred before or afterward, the team would be anonymous. END_OF_DOCUMENT_TOKEN_TO_BE_REPLACED

Paul and the Marriage Supper

It seems that some of the Jews and many of the gentiles who heard Paul speak in the synagogue of Pisidian Antioch wished to speak of these things again the next Sabbath (Acts 13:42-43), and both Paul and Barnabas spoke with them at that time and encouraged them to remain in the grace of God. That is, to believe the Gospel is a lot like receiving an invitation to an event and being excited over attending that event. Paul and Barnabas told these believers to remain excited; don’t be persuaded by someone who makes light of its value that the event isn’t worth attending. END_OF_DOCUMENT_TOKEN_TO_BE_REPLACED

In a recent blog-post (HERE), I suggested that Saul changed his name to Paul at Acts 13:9, and that Luke is doing some word play on the names of Elymas-Bar Jesus and Saul/Paul. While I still believe this, my suggestion that Saul received his name, Paul, rather recently in Syrian Antioch as a put-down by Romans, wishing to denigrate his evangelistic activity there, has been brought into question by Richard Fellows (HERE, and HERE), and I cannot, legitimately disagree. END_OF_DOCUMENT_TOKEN_TO_BE_REPLACED

It may surprise some today to learn that the Jews exercised an impressive missionary effort among the gentiles of the first century CE. Hillel is considered to be one of the most beloved Pharisees of ancient Judaism, and he advocated that the Jews would “love your fellow-creatures, and draw them near to the Torah” [Babylonian Talmud: Seder – Nezikin: Avoth, chapter 1, Mishna 12]. Jesus himself accused the Pharisees of proselytizing the world to find one single disciple and then made him twice the son of hell as themselves (Matthew 23:15). END_OF_DOCUMENT_TOKEN_TO_BE_REPLACED

Posted by Eddie on November 13, 2012 in Paul First Missionary Journey

As the Leaders Go, So Goes the Nation

Sadly, but almost always true is the fact that the people follow the leadership of their nation even when the end is folly. It was not only true of the Jews, but it was so of the gentiles, as well that Christ was rejected. The Romans never embraced the Gospel, so why do we make a particular point in saying the Jews rejected it? Perhaps it is because they were God’s chosen people, but nevertheless, the scriptures show that when Jesus was given the Kingdom (Revelation 11:15-19), the kings or leaders of the earth were angry. None of the nations ever embraced the Gospel. END_OF_DOCUMENT_TOKEN_TO_BE_REPLACED

Posted by Eddie on November 11, 2012 in Kingdom of God, Paul First Missionary Journey 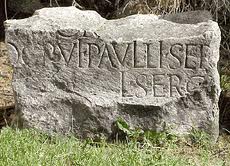 were invited to speak to the people in the synagogue at Pisidian Antioch. Paul rose up to speak, as he appears to have been spearheading the team’s evangelistic effort there. This city was the chosen home of Sergius Paulus and his family. The Roman governor of Cyprus was astonished with the power of the word of God, expressed through Paul (Acts 13:12) and no doubt had given him letters of introduction, to be presented to the Jewish elders of the synagogue in Pisidian Antioch. This was the very synagogue where he worshiped before he was appointed governor of Cyprus, and it was where his family presently worshiped. END_OF_DOCUMENT_TOKEN_TO_BE_REPLACED

Paul and the Jewish Lectionary System

At times it is difficult to really understand the full meaning of any story without knowing the context into which the story is placed. The same would be true of understanding certain Biblical texts. For example, in Luke 16:19-31 Jesus tells a story of an unidentified rich man and a beggar he names Lazarus. Would our understanding of Jesus’ story change or be helped by knowing that the rich man’s clothing, as described by Jesus, was identical to that of the high priest at Jerusalem? END_OF_DOCUMENT_TOKEN_TO_BE_REPLACED

Posted by Eddie on November 7, 2012 in Paul First Missionary Journey

Who’s the Leader—Barnabas or Paul?

Some scholars conclude that the Holy Spirit says through Luke that Paul became the leader of the evangelistic team at Acts 13:9-11. Is this so, and if it is true, why doesn’t Luke explicitly tell us what occurred that would warrant Barnabas taking second place to Paul? Some even believe that this is why Mark became upset and went back to Jerusalem, because it seems in Acts 13:9-11 that Paul became the leader of the group, usurping that authority away from his uncle, Barnabas. Does either argument hold water? END_OF_DOCUMENT_TOKEN_TO_BE_REPLACED

Posted by Eddie on November 5, 2012 in Paul First Missionary Journey

Why Did Mark Leave Paul?

Something occurred on Cyprus that left Mark disenchanted with being a part of the missionary efforts that Paul seemed to embrace. What was it? Moreover, why would Paul later be so adamantly against receiving Mark back as a team-member that both he and Barnabas had to separate in order to resolve the issue (Acts 15:37-39). Was this simply a petty matter that Paul just wouldn’t forgive, or is there something here beneath the surface that Luke doesn’t explicitly expose, but, nevertheless, reveals through his choice of words and placement of certain events in Acts? END_OF_DOCUMENT_TOKEN_TO_BE_REPLACED

Posted by Eddie on November 3, 2012 in Paul and Barnabas, Paul First Missionary Journey

Sergius Paulus was the governor of Cyprus during the time of Barnabas and Saul’s evangelistic efforts there cir. 44 CE. Archeologists have discovered a stone in Rome commemorating his being appointed as one of the keepers of the banks and channel of the river Tiber. He was appointed to this office in what would have been 47 CE, sometime after he fulfilled his time as governor of Cyprus. According to Luke, he appears to be a God-fearer who worshiped in the local synagogue in New Paphos on the northwestern coast of Cyprus. When he heard Barnabas and Saul preach in the synagogue, he asked the team to meet with him at his residence and tell him more about the word of God. END_OF_DOCUMENT_TOKEN_TO_BE_REPLACED

How Did Saul Become Paul?

For the first time Luke refers to Saul by the name Paul in Acts 13:9, and most commentaries believe that Christianity’s great evangelist was given the name Paul at birth and answered to his Roman citizenship, but Saul was given as his Hebrew name. However, this is not necessarily so. Paul’s birth names may not have even come down to us. It is unlikely that a Jew born in Tarsus was given a Hebrew name. In fact, according to Richard Fellows (HERE), archeologists have not uncovered one Hebrew name in Tarsus! Most likely Paul was given the name Saul when he began his studies in Jerusalem as a young lad. END_OF_DOCUMENT_TOKEN_TO_BE_REPLACED

Posted by Eddie on October 30, 2012 in Acts of the Apostles, Paul First Missionary Journey

Who Was Elymas—Bar Jesus? ~ Part 2

Posted by Eddie on October 28, 2012 in Paul and Barnabas, Paul First Missionary Journey

Who Was Elymas—Bar Jesus? ~ Part 1

For quite some time I had been looking for a better explanation of what occurred on Cyprus when Barnabas and Saul came there to evangelize the island in the name of Jesus. After all, it is here where Saul changed his name to Paul, and it is here where Mark seems to get upset and leaves the group after they leave the island. Luke is conspicuously silent over the reasons for these seemingly important issues. He states what occurred without commentary and leaves the reader to figure things out through the wording he uses and his placement of the events. END_OF_DOCUMENT_TOKEN_TO_BE_REPLACED

Posted by Eddie on October 26, 2012 in Paul and Barnabas, Paul First Missionary Journey