Jesus reminded the disciples of what he had told them before they arrived in Jerusalem, namely, that all things written in the scriptures concerning him must be fulfilled (Luke 24:44). Moreover, this pertained to how he would be mistreated and mocked by the Jewish leaders, and how he would be scourged and crucified by the gentiles, but he would rise again on the third day (cf. Luke 18:31-34; 24:25-26). He then began to open their understanding of the scriptures (Luke 24:45; cf. Acts 16:14), but this may not have been like switching on a light in order to dispel their darkness. Rather, it may have taken several appearances, before the disciples fully understood and embraced what Jesus had been telling them for some time (cf. Acts 1:3). One doesn’t rid himself of false doctrine very easily or all at once. END_OF_DOCUMENT_TOKEN_TO_BE_REPLACED

Comments Off on Cherry-picking Scripture Leads to Error

Why Were the Women Afraid?

When the women came to the sepulcher where Jesus was laid, they found the stone that sealed the tomb (Matthew 27:66) was rolled away (Luke 24:2-3). Luke tells us that the women were perplexed (G1280). That is, didn’t know why the tomb was empty (Luke 24:4-5). In other words, the thought that Jesus had arisen from the dead, hadn’t even occurred to any of them. The Greek word (G1280) is used of Herod being in doubt of who Jesus was in Luke 9:7. It is also used for the confusion of the chief priests and the captain of the Temple when they found out the Apostles had escaped their prison cell and were teaching in the Temple (Acts 5:34). END_OF_DOCUMENT_TOKEN_TO_BE_REPLACED

For practical purposes the Romans needed an accusation to charge Jesus in order to crucify him, because such a thing would become a matter of public record. In the second century AD Justin Martyr, while addressing the Emperor, Pius, mentioned that proof of what he said could be obtained from the Acts of Pilate,[1] something that hardly could be so, if Pilate wasn’t required to record the reasons for the executions he commanded. Therefore, Pilate’s official verdict was: Jesus of Nazareth was the King of the Jews—a political crime, something for which he had earlier found him innocent. Nevertheless, he could hardly mention in a public record that he had executed Jesus for claiming to be the Son of God, a religious crime, according to the Jews (John 19:7, 13-16), but a matter of harmless superstition, according to Rome (cf. Acts 25:18-20). END_OF_DOCUMENT_TOKEN_TO_BE_REPLACED

Comments Off on Unbelief and Mocking Jesus

Comments Off on Pilate’s Verdict of Crucifixion

END_OF_DOCUMENT_TOKEN_TO_BE_REPLACED 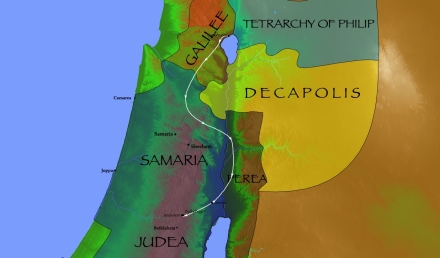 In Luke 18:31 Jesus embarks on his final journey to Jerusalem, but lots of folks believe that Jesus began that trip to Jerusalem at Luke 9:51. Nevertheless, to do so they have to have the Lord meandering aimlessly all around Judea (Luke 10:38), but never quite making it to Jerusalem. After wandering all about Judea, Jesus then turns back to Galilee in order to go through Peraea (Luke 13:22; 16:18; cf. Mark 10:1-12), journeying toward Jerusalem, but, again, never actually getting there. After this, Jesus once more returned to Galilee in order to pass through those cities and Samaria (Luke 17:11) to journey toward Jerusalem, but, once again, he never completes his task. Finally, Jesus is found in Ephraim (John 11:54) and left there to pass through Jericho to approach Jerusalem from the east. All this aimless meandering must be done in order to hold onto the false notion about Jesus began his journey to the cross at Luke 9:51. END_OF_DOCUMENT_TOKEN_TO_BE_REPLACED

Comments Off on Jesus’ Final Journey to Jerusalem

The Crucifixion that Almost Was

I wonder if Jesus could have been crucified one year earlier than when that event actually took place, which, according to my understanding, took place in 31 AD. Could God have permitted the event to occur one year earlier, and would this have made a difference afterward, as far as the preaching of the Gospel was concerned? The fact is, that Jesus does seem to indicate that the crucifixion could have occurred one year prior to when it actually took place. Nevertheless, it was delayed because Jesus prayed to his Father. I was surprised to see this possible eventuality and almost missed it. Would it have changed anything, if Jesus was crucified at another time? Perhaps matters such as this can never be known with certainty, but it is encouraging to understand that Jesus prays for us, and our heavenly Father listens to Jesus and always answers his prayers (John 11:41; cf. 1John 5:15). END_OF_DOCUMENT_TOKEN_TO_BE_REPLACED

Comments Off on The Crucifixion that Almost Was