Albert Einstein once said that logic would take one from A to B, but imagination would take one everywhere. I could say something similar about how one interprets the Apocalypse. Scripture will take us from “A” to “B”, but imagination will take us everywhere. It seems to me that some folks really believe that, if they could imagine a thing to be true as an interpretation of the Apocalypse, then that thing **must** be so. Some of the places the commentaries take us in this book are really bizarre. END_OF_DOCUMENT_TOKEN_TO_BE_REPLACED

Comments Off on Blowing the Fifth Trumpet

Posted by Eddie on August 22, 2019 in Apocalypse, Book of Revelation

When Jesus opened the fifth seal, John’s attention was drawn toward the Altar of Incense, where the prayers of the saints were offered to God by the High Priest. There John was given a vision of those who were martyred for the testimony they bore, concerning the Word (Logos, G3056) of God (Revelation 6:9). Martyr vindication is a major theme found throughout the Bible (Matthew 23:29-33, 35-36), and it is this very matter that is referred to in the question the souls asked the Lord. END_OF_DOCUMENT_TOKEN_TO_BE_REPLACED

Comments Off on The Fifth Seal – Persecution

Posted by Eddie on July 11, 2019 in Apocalypse, Book of Revelation

I am, presently, involved in a study of the Apocalypse, and at this point I’m considering what John saw in chapter four. In previous studies in this chapter, we’ve looked at John’s call to come up and enter the open door. John was taken in vision to behold the Lord sitting on his throne, and he witnessed sights that were difficult to describe, such as a rainbow that resembled an emerald in its brilliance. Around the throne were twenty-four other thrones upon which elders sat, whom I’ve concluded were the captains of the twenty-four courses of priests inaugurated by David, when he brought the Ark of the Testimony to Jerusalem for a permanent residence. END_OF_DOCUMENT_TOKEN_TO_BE_REPLACED

Comments Off on The Glassy Sea

Posted by Eddie on June 13, 2019 in Apocalypse, Book of Revelation

Jezebel’s Judgment and Killing with Death

In Revelation 2:21 the Lord is still speaking to the leader of the church at Thyatira, and he is speaking about that Jezebel he mentioned in the previous verse. Jezebel is a name for those who claim to be Jews, but are not. That is, they claim to be the people of God, but they don’t obey him. They are the Jews who crucified the Lord. She was given time to repent, probably the time between Jesus’ resurrection and Stephen’s death (cir. 3 1/2 years), but they didn’t. This period was a period of relative safety granted the elect believers, as mentioned in Revelation 12:14. It culminated in spilling righteous blood, so the Jerusalem authorities simply wouldn’t repent. END_OF_DOCUMENT_TOKEN_TO_BE_REPLACED

Posted by Eddie on April 16, 2019 in Apocalypse, Book of Revelation

Jesus reminded the disciples of what he had told them before they arrived in Jerusalem, namely, that all things written in the scriptures concerning him must be fulfilled (Luke 24:44). Moreover, this pertained to how he would be mistreated and mocked by the Jewish leaders, and how he would be scourged and crucified by the gentiles, but he would rise again on the third day (cf. Luke 18:31-34; 24:25-26). He then began to open their understanding of the scriptures (Luke 24:45; cf. Acts 16:14), but this may not have been like switching on a light in order to dispel their darkness. Rather, it may have taken several appearances, before the disciples fully understood and embraced what Jesus had been telling them for some time (cf. Acts 1:3). One doesn’t rid himself of false doctrine very easily or all at once. END_OF_DOCUMENT_TOKEN_TO_BE_REPLACED

Comments Off on Cherry-picking Scripture Leads to Error 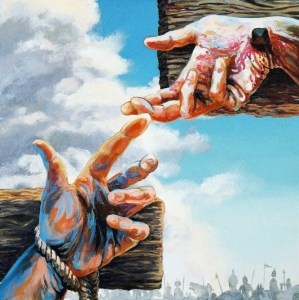 Luke mentions that one of the criminals taunted Jesus, demanding him to save himself and them who were crucified with him (Luke 23:39). The second criminal, however, rebuked the first, telling him he had no fear of God, before whom they both were coming to be judged (Luke 23:40). The second man admitted to his guilt, saying that both his and the other man’s judgment fit the crimes they committed (Luke 23:41). END_OF_DOCUMENT_TOKEN_TO_BE_REPLACED

Comments Off on The Good Thief

What Did Noah Know? 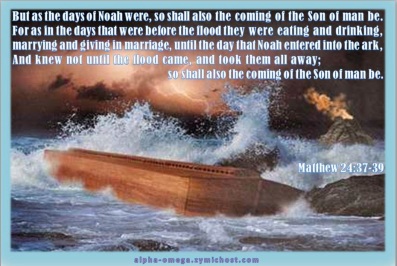 Some Christians believe that the Lord actually came spiritually in 70 AD, judged Jerusalem and destroyed the Temple through the Roman army he brought against the Jews. However, having done that, he returned to heaven and rules from there, and he will return sometime in the future in a more glorious physical coming, whereby he will judge the nations. Some even tell us he will destroy and then rebuild the earth, from which he will reign (physically) forever. The alleged proof of such a doctrine begins with the little word “but” in Matthew 24:36: “BUT… of that day and hour knows no man, no, not the angels of heaven, but my Father only.” – All things before the but occurred by 70 AD, and all things after the but will occur (allegedly) at Jesus’ yet future Second Coming! So… what can be said about this matter? Does the Lord really come twice? Is that what he said he would do? END_OF_DOCUMENT_TOKEN_TO_BE_REPLACED

Comments Off on What Did Noah Know?

There is little doubt that the they in the text at Luke 19:7 refers to the Pharisees and possibly scribes who might also have been curious enough to watch what Jesus did, as he passed through Jericho. Certainly, both groups were critical of Jesus in the past (Luke 5:30; 6:7; cf. 11:53), and there is no reason to believe Jesus’ critics were the common people (John 7:26). The Greek word used for murmured (G1234) is used only in Luke and then only at 15:2 and 19:7, and at Luke 15:2 it points to the scribes and Pharisees. However, this same Greek word is used in the Septuagint for those who murmured against Moses and Aaron (Exodus 15:24; 16:2, 7-8; 17:3; Numbers 14:2). It is also used of those who brought back a bad report of the Promised Land (Numbers 14:36), so the murmuring on these occasions was done by the leaders of Israel. END_OF_DOCUMENT_TOKEN_TO_BE_REPLACED

Comments Off on Zacchaeus’ Testimony

The Heart of God Toward the Sinner

In the Parable of the Prodigal Son, when his young son was still on his path home, his father ran to him, while his son was still some distance away (Luke 15:20b). It is implied in this verse that our heavenly Father meets us at some point in our journey back to him. He makes certain that we don’t have to make the full journey of repentance alone. The fact that the father of the young man ran to him would seem quite unfitting in the custom of the day, and this expresses the idea that our heavenly Father will not react toward us, in the manner in which we expect of him. Far from being angry over what we’ve done, he is always ready to give us much more than we desire. END_OF_DOCUMENT_TOKEN_TO_BE_REPLACED

Comments Off on The Heart of God Toward the Sinner

Being Brought to Repentance 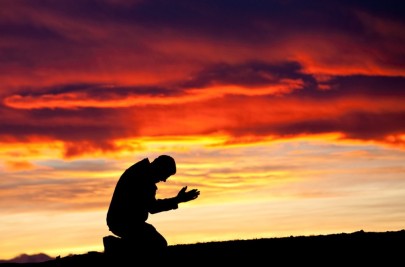 In the Parable of the Prodigal Son Jesus tells of the condition that befell the young man after he had left his father. He spent his inheritance on strangers, and afterward found he hadn’t a friend among them. With his wealth gone, he came to realize he was a stranger in a strange land, and, at least for him, there was a famine in that land (Luke 15:14). That is he was alone and destitute with no means of saving himself. END_OF_DOCUMENT_TOKEN_TO_BE_REPLACED

Comments Off on Being Brought to Repentance

In Luke 12:54-55 Jesus turned from his disciples and directed his teaching to the people, among whom were his taunters, the Jewish authorities. He drew an analogy from the weather. The people understood that when a cloud rose up out of the Mediterranean Sea to the west, there would be rain. Again, when the wind came across the hot desert to the south, the people were able to predict warm, dry weather (Luke 12:54-55). In other words the people knew how to interpret signs of things to come. END_OF_DOCUMENT_TOKEN_TO_BE_REPLACED

Comments Off on Signs, Morality and Logic

Does Jesus Say Punishment Is Eternal? 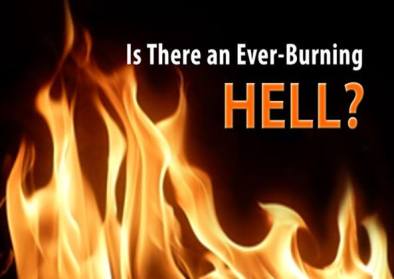 Jesus tells us in Luke 12:5 the God has to power to cast folks into hell, and implies that he will do exactly that when some folks are judged. The question is, however, does Jesus mean what so many modern Christians understand him to mean? The Greek word Jesus used for hell is gehenna (G1067). The word is derived from Hinnom, the name of a valley just off the southwest wall of Jerusalem. It was a place where some of the kings of Judah sacrificed their children to the Phoenician god, Molech. King Josiah destroyed its altars and filled it with dead bodies in order to make it unclean for any kind of worship. Later the Jews turned it into a garbage dump where they burned the city’s refuse. END_OF_DOCUMENT_TOKEN_TO_BE_REPLACED

During the dinner to which Simon, the Pharisee, invited Jesus, a woman, who had heard Jesus was in the Pharisee’s house, came in also with the intention of anointing Jesus with the ointment out of the alabaster box she carried with her (Luke 7:37-38). Luke tells us she was a sinner. Obviously she was very emotional in the account written by Luke. She seems to have been sad over something, but also grateful to Jesus, because she held him in awe for some reason, but Luke is silent about these details. Nevertheless, the woman took her place at Jesus’ feet and wept there. Her tears fell on Jesus’ feet, and she wiped them with her hair; and she kissed his feet and anointed them with the ointment out of the alabaster box she had with her. END_OF_DOCUMENT_TOKEN_TO_BE_REPLACED

Comments Off on The Two Debtors

Freedom to Be Gracious

It is a gracious matter to endure suffering, while acting out of one’s desire to be obedient to God (1Peter 2:19), or to behave in a manner pleasing to him. Often, this suffering comes at the hand of others. When Peter addresses the plight of the servant in 1Peter 2:18-20, application can be made to other walks of life, for example one is able to act out Peter’s argument at one’s place of employment. Yet, it needs to be remembered that the primary application is to the one who has no freedom, like slaves and conquered peoples. END_OF_DOCUMENT_TOKEN_TO_BE_REPLACED

Comments Off on Freedom to Be Gracious

Posted by Eddie on December 16, 2016 in Epistles of Peter