Why would a nice guy like Stephen get arrested and then executed, either by rule of the Sanhedrin or mob violence? Acts 6:8 tells us he was a miracle-worker, and the people seemed to love the believers among them who healed their ailments (Acts 5:12a, 15-16, 26), but something seems to have occurred here that kept Stephen from being protected by the power of the people. What was it? END_OF_DOCUMENT_TOKEN_TO_BE_REPLACED

Authority But Not “Our” Authority 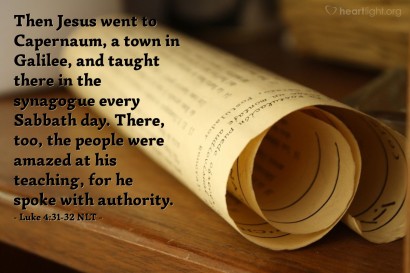 After Peter’s testimony before the Sanhedrin in Acts 4, the rulers took note that Peter and John had been with Jesus. They were surprised with the Apostles’ boldness. They had marveled at Jesus’ boldness despite the lack of formal education (John 7:15) He spoke with authority, but not authority conferred upon him by any of the Jewish rabbinical schools. The rulers were faced at this time with a similar phenomenon in Jesus’ disciples. Boldness is one of Luke’s favorite descriptions of believers (Acts 2:29; 4:13, 29, 31; 9:27, 29; 13:46; 14:3; 18:26; 19:8; 26:26; 28:31). The Greek word (G3954 or G3955) means to have assurance or confidence; to speak freely etc., and this boldness is always used in connection with the Gospel and testifying to the fact that Jesus is Lord (cp. Acts 9:27-29). END_OF_DOCUMENT_TOKEN_TO_BE_REPLACED

Posted by Eddie on October 4, 2011 in Acts of the Apostles

The Builders and the Stone

When the Apostles were arrested in Acts 4 they were force to confront the very people that had Jesus put to death. While some of these people could be swayed according to the theology they held, many of the members of the Sanhedrin were harsh, having their own interest in view. Their judgment was tempered only by the prevailing will of the people, which, if they could influence as was done in the case of Jesus’ crucifixion, strengthened their resolve to have their own desires implemented. Six months to a year ago these same men had Jesus put to death, and now they found themselves wrestling with his movement in the persons of the Apostles. END_OF_DOCUMENT_TOKEN_TO_BE_REPLACED

Posted by Eddie on September 20, 2011 in Acts of the Apostles

Jesus is Alive and Here’s the Proof!

Peter and John had been brought before the Sanhedrin in an effort to squash the Gospel before it really began to take hold in Jewish society. The authorities had found the Apostles preaching the resurrection in the Temple and arrested them, planning to hear their case the following day (Acts 4:1-3). The problem for the authorities was they put themselves between a rock and a hard place as far as squashing the new movement was concerned. To bring up the resurrection (the real reason for their arresting the Apostles; see verse-2) would have divided the court between Sadducees and Pharisees and nothing would be accomplished. What to do? So, they decided to threaten them (Acts 4:17). END_OF_DOCUMENT_TOKEN_TO_BE_REPLACED

Posted by Eddie on September 15, 2011 in Acts of the Apostles

Was Paul a Member of the Sanhedrin? 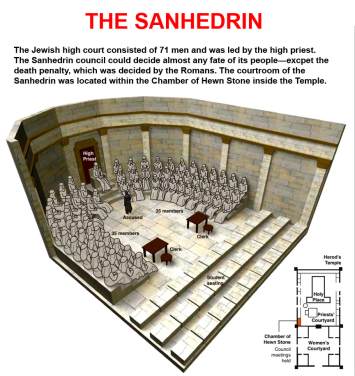 The evidence for such an understanding is sketchy, but it is a possibility that Saul / Paul was indeed a member of the Sanhedrin during the 1st century CE when Stephen was stoned. He tells us in his letter to the Galatians that he had been excelling above his peers in the Jewish faith. In Acts 8:1 we are told that Saul “gave his approval” to the killing of Stephen. Does this mean he generally agreed that Stephen’s death was justified, or that he actually gave his “vote” in the Sanhedrin? Notice how Paul, himself, describes similar accounts concerning those believers he brought to Jerusalem for judgment when he spoke before King Agrippa: END_OF_DOCUMENT_TOKEN_TO_BE_REPLACED

The Three Trials of Jesus

My wife and I were discussing Jesus’ trials, and one thing led to another, and lo and behold, we found ourselves involved in a really rewarding little study. It is a bit difficult to convert our conversation to paper, but I’ll give it a go. We discovered that there are a number of things that tie together which unveil more and more first, about what Jesus’ trials consisted of, and secondly, their significance. Jesus’ trials are found in Matthew 4 and Luke 4. In Matthew Jesus’ first temptation concerns turning stones into bread, the second concerns Jesus casting himself off the pinnacle of the Temple and depending upon God to save him from harm, and the third and final temptation concerned outright worship of the enemy in order to receive the kingdoms of the world and reign as king over all. Luke says the same but reverses the second and the third—and my wife, Kay, and I found this also to be significant.

END_OF_DOCUMENT_TOKEN_TO_BE_REPLACED

The reason Jesus was condemned to die was that he claimed to be the Son of God. To show this, I’ll quote Luke but consider also the pertinent Scriptures in Matthew 26:63-66 and Mark 14:61-64 that record the trial of Jesus:

Luke 22:66-71 KJ2000 And as soon as it was day, the elders of the people and the chief priests and the scribes came together, and led him into their council, saying, (67) Are you the Christ? tell us. And he said unto them, If I tell you, you will not believe: (68) And if I also ask you, you will not answer me, nor let me go. (69) Hereafter shall the Son of man sit on the right hand of the power of God. (70) Then said they all, Are you then the Son of God? And he said unto them, You say that I am. (71) And they said, What need we any further witness? for we ourselves have heard of his own mouth. (emphasis mine)

Some have said Jesus was not really admitting he was the literal Son of God, because Matthew and Luke have him saying that the high priest says this about him. This is a very weak argument. The phrase, “Thou hast said…” (Matthew 26:64) or “Ye say that I am…” (Luke 22:70) is a Greek idiom for an affirmative answer according to “Robertson’s Word Pictures” (i.e. I am as you say). It is translated plainly in Mark 14:62 as “I am.” In John 18:37 when Pilate asked Jesus if he were a king, Jesus replied, “Thou sayest that I am a king. To this end was I born…” Jesus uses the idiom and then goes on showing that his answer to Pilate was in the affirmative. Therefore, the argument that Jesus was merely saying that the high priest was accusing him of saying something he (Jesus) had not said, is moot. Jesus spoke plainly, and the high priest rightly understood Jesus’ claim to Deity. END_OF_DOCUMENT_TOKEN_TO_BE_REPLACED

Posted by Eddie on November 4, 2009 in Jesus, Religion

Given that the religious leaders of the day found Jesus guilty of blasphemy, this was nothing to Pilate. So, we must ask: for what charge was Jesus crucified? What did the Jewish authorities say to the Roman governor? First of all, they were vague. They wanted Pilate to kill Jesus just because they found him guilty in the Sanhedrin. They desired the Roman governor to rubber stamp their decision (John 18:29-30), but this didn’t work. Pilate told them to punish him themselves, but they wanted the death penalty, which only Pilate had authority to administer (John 18:31-32). But, before Pilate could leave they began shouting accusations of insurrection. Notice: END_OF_DOCUMENT_TOKEN_TO_BE_REPLACED

Posted by Eddie on August 18, 2009 in Blasphemy, Religion

Jesus Before the Sanhedrin

On what basis in Jewish law was Jesus convicted by the Sanhedrin? Matthew and Mark say the high priest accused Jesus of blasphemy (Matthew 26:65; Mark 14:63). Did Jesus commit blasphemy? If not, why did the high priest believe he did or at least was able to convince the other priests present that Jesus spoke blasphemy? Luke records the trial held by the Sanhedrin in the morning: END_OF_DOCUMENT_TOKEN_TO_BE_REPLACED

Posted by Eddie on August 18, 2009 in Blasphemy, Religion