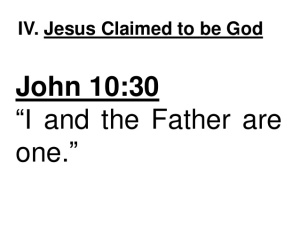 It was winter about four months before Jesus’ death. He was in Jerusalem for the Feast of Dedication, what the Jews call Hanukkah today. Jesus was in the Temple and the Jewish authorities came up to him, demanding that he would tell them plainly who he was (John 10:22-24).

John 10:25-31 KJV Jesus answered them, I told you, and ye believed not: the works that I do in my Father’s name, they bear witness of me. (26) But ye believe not, because ye are not of my sheep, as I said unto you. (27) My sheep hear my voice, and I know them, and they follow me: (28) And I give unto them eternal life; and they shall never perish, neither shall any man pluck them out of my hand. (29) My Father, which gave them me, is greater than all; and no man is able to pluck them out of my Father’s hand. (30) I and my Father are one. (31) Then the Jews took up stones again to stone him. (emphasis mine)

Some people believe that Jesus was merely saying that he and the Father are of one mind or purpose and quote John 17:11 as a proof text, saying Jesus is one with the Father in the same way that we are. However, Jesus never said that we are one with the Father or even one with Jesus. Jesus described our unity with one another as unity in the Spirit, just as the Father and the Son are one Spirit. We being many are one body (Romans 12:5). Our unity is enabled only as we abide in Christ (John 15:1-7). We have access to the Father only through Christ (Ephesians 2:18). Jesus is the God-Man who makes this possible. He, as God, has unbroken fellowship with his Father (God – John 1:1), and, as the Man, he enables our fellowship with God (1Timothy 2:5). Elsewhere it is called coming to the Father in Jesus name (John 16: 23-24, 26).

Therefore, if Jesus had only unity of will or purpose in mind, as some suggest, why would the Jewish leaders take up stones to cast at him in the very next verse (John 10:31) and claim he was making himself God two verses after that? Jesus never claimed that these men misunderstood him, though he could have done so, if the situation warranted it. Elsewhere, the text clearly shows when people misunderstood Jesus’ words (Mark 9:32; Luke 2:50, 9:45; John 8:27, 10:6). Nevertheless, Jesus asked them to consider his works. Why would they stone him for the miracles he did that no other man could do (verse-32)? The Jewish leaders responded that they were not stoning him for his good works, but for his claiming he was God (verse-33). Their reply only exposed their obvious hatred and prejudice, because how could anyone do the works that Jesus did, unless he were at the very least sent and empowered by God, as the prophets of the Old Testament were. 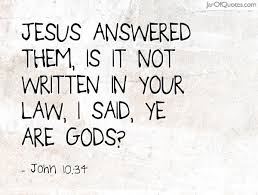 Knowing how they received his statement and their intent on killing him, Jesus had the opportunity to declare they were only misunderstanding what he was saying, but he did not contradict how they understood what he claimed in John 10:30. Instead, he pointed out in Psalm 82:6 how God refers to civil leaders as gods, as it pertains to their office. When men exercise the authority of God over men, they are called gods by the Almighty. Nevertheless, as the Psalm suggests, though men exercise the authority of God, this does not mean God approves of how they use his power, as he did with Jesus. In fact, in Psalm 82:8 the Scripture says, “Arise, O God, judge the earth: for thou shalt inherit all nations.” Here is a call for the God of gods to arise and exercise righteous judgment, because the leaders (gods) of men have not acted properly in his place. One might ask: who it is who will inherit all nations and will judge the whole earth (Psalm 2:8). It is Jesus (Revelation 12:5; 19:15-16)! He is the God of gods, the Ruler of the kings of the earth. Therefore, Jesus could not have been committing blasphemy, because not only are the leaders of men called gods when acting in God’s place, but Messiah is called God in Psalm 82:8 in that he is the God of gods. These men (gods) were abusing the authority of God, which they exercised under Jesus!

In John 10:33 Jesus responded to his accusers by calling himself the “Son of God,” but this in no way softens his claim to Deity. How could his claim that he and the Father are one (John 10:30) and his claim to be the God of gods (Psalm 82:8) be understood that he is “Son of God” (John 10:36)? Simply because Messiah is called the Son of God in Psalm 2:7 and inherits authority over nations in Psalm 2:8.

Psalms 2:6-9 KJ2000 Yet have I set my king upon my holy hill of Zion. (7) I will declare the decree: the LORD has said unto me, You are my Son; this day have I begotten you. (8) Ask of me, and I shall give you the nations for your inheritance, and the uttermost parts of the earth for your possession. (9) You shall break them with a rod of iron; you shall dash them in pieces like a potter’s vessel. (emphasis mine)

Psalm 2 had always been used during the coronation ceremonies of the kings of Judah, and each king was understood to be the son of God. This Psalm became Messianic when the rabbis realized in captivity that no king of Israel or Judah had ever fulfilled its promises. That is, the Son of God—the King—was to inherit the nations. No king of Judah or Israel, not even David or Solomon had ever been king over all the nations of the world. Therefore, it was seen as a Messianic Psalm to be fulfilled by the Messiah, the Son of God, to whom the Psalm clearly refers.

The problem is Psalm 82 claims the one who inherits the nations is the God of gods or Elohim, the God of Judah and Israel. Therefore, Jesus’ claim to be the Son of God in John 10:33 cannot be viewed as a disclaimer showing Jesus is denying he is God. On the contrary, the Son of God who is the Messiah in Psalm 2 is the God over all Israel in Psalm 82 as the texts clearly show.

Even the Jews understood Jesus’ claim to be the Son of God (John 10:33) was in a literal sense, and he was claiming to be God in the flesh. They believed they were the children of God in a spiritual sense (John 8:41), so why would they try to seize Jesus in John 10:39 and kill him as a blasphemer? Therefore, they understood Jesus as speaking literally and not in the sense that they thought themselves to be sons of God. In other words, Jesus was claiming to be God in the flesh!