The Song of the Lamb 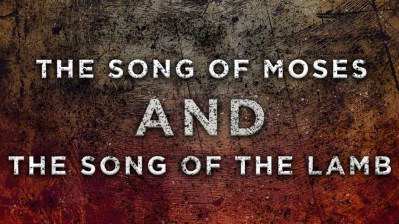 Posted by Eddie on January 12, 2020 in Apocalypse, Book of Revelation

Yet, a third angel in the fourteenth chapter of the Apocalypse arose and said: “…If any man worship the beast and his image, and receive his mark in his forehead, or in his hand, The same shall drink of the wine of the wrath of God, which is poured out without mixture into the cup of his indignation; and he shall be tormented with fire and brimstone in the presence of the holy angels, and in the presence of the Lamb” (Revelation 14:9-10). END_OF_DOCUMENT_TOKEN_TO_BE_REPLACED

Posted by Eddie on December 24, 2019 in Apocalypse, Book of Revelation

Yet another angel mentioned in the Apocalypse told John: “Babylon is fallen! is fallen! that great city, because she made all nations drink of the wine of the wrath of her fornication” (Revelation 14:8). Babylon was the spiritual name for an existing city in the first century AD, and all of John’ readers would have known who he meant. According to Revelation 17:5 she is called mystery Babylon the Great! There she is called a harlot (G4204 – Revelation 17:1) and the mother of harlots (verse-5), and she was responsible for all the blood of the saints and disciples of Jesus (Revelation 17:6). Jesus said Jerusalem was responsible and would be judged for all the righteous blood that was shed from the time of Able to the first century AD, and he included those disciples of his that he would send to her with the Gospel (Matthew 23:34-35; cf. 23:37-38). END_OF_DOCUMENT_TOKEN_TO_BE_REPLACED

Posted by Eddie on December 22, 2019 in Apocalypse, Book of Revelation

Over Whom Did the Beast Reign?

The beast had power or authority over Jews, and only Jews who were the physical descendants of Abraham, Isaac and Jacob. He, indeed, had authority over all tribes, no matter which language was spoken, and no matter where they resided in the Roman Empire (Revelation 13:7). However, that authority was limited to the Jewish race. It did not include gentiles. END_OF_DOCUMENT_TOKEN_TO_BE_REPLACED

Comments Off on Over Whom Did the Beast Reign?

Posted by Eddie on November 26, 2019 in Apocalypse, Book of Revelation

As I conclude this study on Revelation 12, we come to the place where the dragon realized he was cast to the earth, and he knew that he had only a short time left, before he would be bound (cf. Revelation 20:1-2), so he persecuted the woman (the elect) who brought forth the male Child, Jesus (Revelation 12:12-13). This literally played out in the life of Herod the Great after he failed to discover where Jesus (“he who was born King of the Jews” – Matthew 2:1-2), was living (Matthew 2:7-8, 11-12, 16). Joseph had taken Jesus and Mary to Egypt (Matthew 2:13-14). It wasn’t until about a year later that Herod was stricken terminally ill, and he knew he had but a short time left before he would die. END_OF_DOCUMENT_TOKEN_TO_BE_REPLACED

The Holy City Is Trodden Down

In Revelation 11:1 John was given the task to measure the Temple of God, but he was told leave out the outer courts (Revelation 11:2), which included the Altar of Burnt Offering and the Molten Sea of brass (1Kings 7:23; 2Kings 25:13), and all the way out to the Eastern Gate of the Temple compound. John’s measurement was to include only the House, itself, with its two main rooms and the furniture therein. The only exception was that he was also to measure the people who worshiped inside the House. This seems to act as a kind of separation between the elect and the unbelievers, as we have also seen in Revelation 7:1-8. Therefore, if nothing outside the House was measured, that also included the people outside the house worshiping in the Temple courts. END_OF_DOCUMENT_TOKEN_TO_BE_REPLACED

Comments Off on The Holy City Is Trodden Down

Posted by Eddie on October 8, 2019 in Apocalypse, Book of Revelation